Julie Bushman served as executive vice president of International Operations at 3M until her retirement in 2020. She brings to the board deep experience in manufacturing, information technology and global business experience.

Bushman was a member of the original leadership team that implemented Six Sigma at 3M. She also has served on the 3M Foundation Board and has led the 3M United Way Giving Campaign.   She served as a director of Johnson Controls from 2012 through the company’s merger with Tyco International in 2016.

She holds a Bachelor of Science in business administration and communicative disorders from the University of Wisconsin-River Falls. 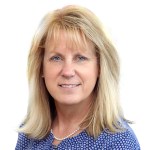