Skip to content
| About Us | Board of Directors | Frederick A. Henderson

As non-executive chairman of the board since October 2018, Frederick Henderson has senior management experience in automotive and manufacturing industries, with deep expertise in general management, strategic planning and financial operations.

Henderson served as interim CEO of Adient from June 2018 to September 2018. Previously, he served as chairman and CEO of SunCoke Energy Partners GP and SunCoke Energy until his retirement in December 2017. Henderson also served as senior vice president for Sunoco, Inc. (prior to the SunCoke Energy spinoff) and as a consultant to General Motors and AlixPartners.

He serves as chairman of the Board of Directors and member of the Governance and Nominating Committee of Arconic Corp. and as Lead Independent Director and chair of the Nominating and Governance Committee of Marriott International, Inc. Henderson is also chair of the board of trustees of the Alfred P. Sloan Foundation and is a Principal of The Hawksbill Group. He previously served as a director of Compuware Corp. until 2014 and as a director of Horizon Global Corporation until 2022.

Henderson holds a Master of Business Administration from Harvard Business School and a Bachelor of Science in finance from the University of Michigan. He is also a certified public accountant. 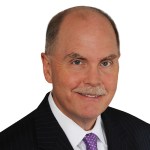