Prior to joining TRW Automotive, Del Grosso spent more than 20 years at Lear Corporation in a variety of operational roles, the last being president and chief operating officer.

Del Grosso holds a Master of Business Administration (MBA) from the Eli Broad College of Business at Michigan State University, as well as a Bachelor of Science degree in mechanical engineering from Lawrence Technological University.

He serves on the board of directors for Cabot Corp. and for NAM (National Association of Manufacturers) as well as on the Committee of Economic Development conference board as a trustee. 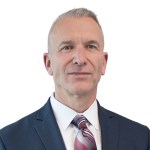